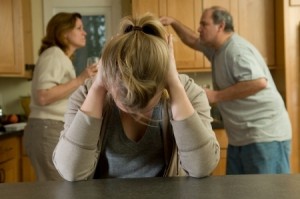 Let’s face it, if anyone has accused you of domestic violence, whether it’s a spouse, a lover, a co-habitant, or a member of your family, the tide of current public opinion will be against you. Since the early ’90′s, when the O.J. Simpson “trial of the century” focused massive public attention on the issue of spousal abuse, national outrage over the verdict created a public outcry for more severe punishments and stricter laws to protect victims of Domestic Violence. As a result of this heightened public awareness, the pendulum of public opinion has swung so far to the other side that – within the entire legal system the saying is: “if the words “Domestic Violence” are mentioned – someone’s going to jail.” The laws have become tougher and harsher in every state of the nation and at every level. Domestic Violence is now a hot-button issue viewed with contempt and condemnation by the public, the police, and prosecutors no matter what the circumstances are or even whether they’re true. When you are accused of “Domestic Violence,” you are viewed as “guilty until proven innocent.”

Jeff Ivashuk believes exactly what the U.S. Constitution says – that you are “innocent until proven guilty,” and he’ll fight for you in court to make sure your rights are not trampled under the tide of negative public opinion. The legal definition of “Domestic Violence” is defined as abuse, threats or violence within an intimate relationship, committed by either male or female, and occurring between spouses, intimate partners, or close relatives. His first and most vital piece of advice is: DO NOT WAIT! Get in touch with an attorney who specializes in Domestic Violence as early in the proceedings as you possibly can.

Domestic Violence cases are handled differently than any other case, and especially in Florida. The state of Florida has special Domestic Violence Unit that do nothing but handle cases of domestic violence, with prosecutors standing by that do nothing but prosecute Domestic Violence Charges as aggressively as possible. Because Jeff Ivashuk spent years in one of these specialized Domestic Violence Units himself, he learned that the necessity of early legal intervention in these cases is not just essential – but vital if there’s going to be any hope of a possible equitable outcome. His second vital piece of advice is: DO NOT THINK YOU CAN GO IT ALONE! You need someone who can think clearly advocating for you with all parties involved, from prosecutor to “victim.” If you’ve been accused of domestic violence it’s certain you will feel hurt, betrayed and angry – especially when the accusation is entirely false – or the events have been exaggerated and blown completely out of proportion, as emotional arguments often are. The truth is that many of the cases labeled as “Domestic Violence” do not belong in court.

If there’s a divorce proceeding and/or child custody issue in question, there are many instances where this law is actually used as a weapon to discredit a partner. It’s also true that there are a large number of cases where the victim never truly wanted an arrest in the first place, especially if intoxicants were involved, and later – in the light of day – the “victim” will plead to have the charges dismissed. But even if the victim drops the charges, pleads to have them dismissed, and then refuses to cooperate in court – the state attorney will usually still pursue the case. Prosecutors will try to obtain a conviction if at all possible, because in the state of Florida, domestic violence isn’t treated as a crime against a person, it’s treated as a crime against the state of Florida.

Depending on the circumstances and situation, domestic violence is often prosecuted as a felony and jail time is mandatory, even if you have no criminal record whatsoever or the “abuse” is extremely minor. When you’re looking at a high stakes issue like this – you need a defense attorney like Jeff Ivashuk at your side in court. Jeff Ivashuk has handled hundred’s of domestic violence cases and arbitrated them to a positive outcome. Jeff Ivashuk’s domestic violence case record has resulted in many charges not being filed, being reduced, settling out of court, and acquittals. He has obtained counseling and education or amicable divorce rather than acrimony and jail time, and helped to reunite families and children with their loved ones. Let a compassionate and caring lawyer help you through the heartbreak of a Domestic Violence charge; let Jeff Ivashuk work for you.